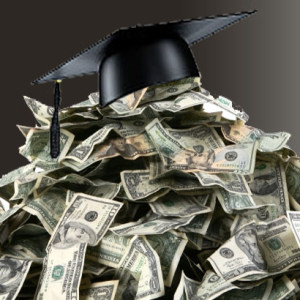 Up to now, the media and the government seems happy to ignore the student debt crisis as it relates to parents. We’ve heard all about the difficulties students and grandparents face, but parents are generally left out of the conversation.

So I’m speaking to that underclass of student loan payees: the dumb parents of the vast middle class with kids too rich and too poor at the same time. The ones suffering through the market-distorting forces brought about by the flood of easy government loan money that signaled institutions of higher learning to jack up prices withÂ impunity and allowed state legislatures to abandon theirÂ commitmentÂ to higher education.

But in my case, I have been in a spin-cycle ofÂ bureaucraticÂ bamboozlement for weeks attempting to pay off the whopping student loans I took out on behalf of my two sons – both of whom by the way are now in medical school on their own loan-enabled dimes.

Our family’s strategy is pretty simple: to tread water with monthly interest-only payments to keep our eight, eight-percent loans from growing while at the same time, working to save additional money to attack principal about twice a year. InÂ essence, we’re buying time with our interest-only payments, and reducing our long-term carrying costs by saving up to attack principal.

We are doing it this way to protect against downside shocks. On the 25-year payment plan option we can more likely weather financial storms should they occur, and make payments against principal at strategic times. It’s a little like taking out a home loan at 30 years but paying it off in 15. You have the downside protection of low payments should you need them, but also try to reduce the financing costs over the life of the loan with a more aggressive self-imposed payment schedule.

When I requested that all eight of our loans (2 kids x 4 years) go out of deferment and into repayment mode, I also set up Nelnet’s KwikPay option to tap our checking account every month to make those interest only payments. On the 20th of every month, the KwikPay tool was set up to pull the payments sufficient to keep our capitalized interest amounts steady.

The strategy to keep interest from accumulating and “re-capitalizing” (being rolled into the original loan) with each passing month. But strangely, I kept finding those loans sliding back intoÂ deferment, and the payments stopping, and the interest growing.

My email inquiry to Nelnet’s communications director has gone unanswered.

After several conversations with some people in-the-know on this, I finally have some insight into the systemic flaw I believe I have discovered.

As part of the government’s deep dive into our shorts as student loan customers, there is data regarding the “beneficiaries” tied to my loans. That means that even though my kid’s names aren’t part of our loan agreements from what I can tell, their social security numbers are still referenced in the loan’s deeper data set. This is no doubt to keep tabs on us across the generations should we decide to become deadbeats.

But there is a side-effect. As it turns out, when one of my kid’s grad schools report that they are still in school, and that they need their portion of their undergrad and grad school loans to remain in deferment, that information is transmitted through something called the “National Student Clearing House” right into my loan, modifying all the terms and settings I have set up to work toward payoff.

I am told there is no way to stop it.

The problem is that if you don’t notice that your automatic payments have stopped, you are unknowingly accumulating more high-rent interest and further compounding your debt problems. You’re also communicating with Nelnet, or one of the other serving companies, every few weeks to un-report what your kid’s institutions are reporting.

Because it turns out this is a known issue, the workaround suggested for parents or other payees is to just give up and keep their loans in deferment, but to have their banks push payments instead of relying on KwikPay pull them.

While that strategy is all well-and-good, I still wondered if a single interest-only payment would be applied correctly – with the total properly apportioned to cover each individual loan’s interest, and that’s what got me digging further into Nelnet’s customer serviceÂ on-lineÂ dashboard.

The fine print in the blizzard of .pdfs that piled-up in my inbox as loans were deferred, then un-deferred, and thenÂ deferredÂ again says that when a loan is in deferment, KwikPay is de-activated by rule.

That is an important fact that payees might miss.

In the case of Nelnet however, I am also happy to report that on the customer dashboard, in the payment section – you can keep your KwikPay bank payment and routing information intact, and manually designate specific amounts to cover the interest on each loan before hitting the “Pay Now” button.

It’s not as elegant as KwikPay, as in my case I have to enter eight amounts into eight loans pay-boxes once a month, but at least it’s a workaround.

However, the problem of what I see as conflicting information cross-contaminating loan servicing data, remains.

It might occur to you that another workaround would be to do a student loan consolidation to facilitate making one manual, monthly payment since KwikPay can’t hold its settings due to the problematic reporting scheme coming between companies like Nelnet and the National Student Clearing House.

But as it turns out, consumers should know there is a broader problem with consolidation too.

With aÂ consolidatedÂ loan, you need to come up with $10,000 to pay outstanding interest before you can touch a penny of principal in these front-loaded loans, even if that interest has been re-capitalized into the loan’s principal amount – which is another questionable practice I won’t dive-into here.

Now compare that with the unconsolidated scenario where you might have one $15,000 loan (a part of the $100,000 you owe) with $1,500 in outstanding interest. In this scenario you can more easily get through the interest “barrier” to whack away at principal. Everything after the first $1,500 goes toward principal when you attack your loans as unconsolidated individuals.

Consolidation puts payees at risk of building a wall of interest so high, that the 25 year payout scenario becomes the only likely alternative for payoff – and that is a wealth-killer.

Until the flaw associated with the co-mingling data between payees is fixed, parents run the risk of accumulating mounds of additional interest – even though they think they’re in repayment, and then keep thinking they’ve re-set the automatic payment system.

I won’t go as far as to say there’s a quiet understanding between the government and the student loan-servicing industry about ways to manipulate data-sharing requirements to encourage the accumulation of additional high-priced interest, but I can say that after lots of probing, it turns out this problem is a known issue – and something parent-payees should know about too.