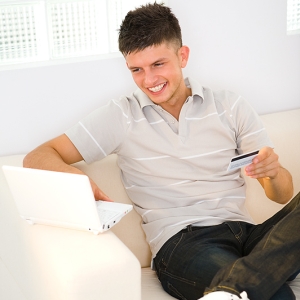 My 20 year old son will soon need to buy a car but he has no credit. What’s the best way for him to establish credit? I don’t know of any stores that will let him pay off a purchase without first checking his credit. Are there still credit cards that will let him put some money on hold in order to back any purchases he might make? How do I find them?

Margie’s son is about to take one of the big steps to adulthood – establishing credit. And it’s important that he get off to a good start. The record that he builds now will follow him throughout his life. And it will effect how much he pays when he borrows money.

A good first step is to open a checking or savings account. It’s an easy way to demonstrate that he’s able to handle money responsibly. Just making regular transactions without overdrawing the account will begin to build a good record.

The next step is to get a credit card. To qualify he’ll need to be 18 years old and have either a steady source of income or a savings account. It’s easiest to qualify for a department store or gasoline card.

If you’re a full-time student you won’t need to prove your income to qualify for a card with a low credit limit. Most card issuers are anxious to sign up college students. Even for major credit cards.

Ironically, it’s harder to get a first credit card after graduation. The card issuers figure that parents will bail out students but not grads.

Margie’s son shouldn’t apply for a bunch of cards. That will hurt his credit rating. It’s much better to get one card and pay it faithfully for a year. Then apply for a second card. That will demonstrate that he’s managing his credit responsibly.

First time cardholders will not get the lowest rates. But if he pays the entire balance each month it won’t make any difference. And paying bills on time is very important.

If Margie’s son has trouble getting a card, he’ll need to use the strategy that she mentioned and apply for a “secured card” first. Money is deposited with a bank which acts as security for your card. If you don’t pay the bill, your money will be taken from the bank account.

There’s enough competition now so that you can find a number of secured cards that don’t require an application fee. Rates run from about 10% to 20% and annual fees range between $18 and $45. Margie’s son can ask his bank or check out Bankrate Monitor to find a card issuer.

If you use a secured card properly it’s possible that you’ll get a better reception on a non-secured card after 12 to 18 months.

Margie’s son needs to manage his use of the cards. The best (and cheapest) plan is to pay the entire bill each month and not carry a balance. Unfortunately, that’s not what most first time cardholders do.

Experts say that monthly installment debt should not total more than 20% of your monthly take home pay. Even that level could be too high. For instance, that much money committed to installment debt could make it very hard to afford a house later.

Now we move on to the specific goal that Margie had – a car loan. It’s likely that there won’t be enough time for her son to build up a good credit history before he wants the car. He should apply for a loan at the bank or credit union where he keeps his checking or savings account. Hopefully his reputation there is good.

It’s also possible that he’ll be able to arrange credit through the dealer where he buys his car. Sometimes they’ll make loans trying to attract younger buyers for their brand of car. If he does go through the dealer he’ll probably pay a higher rate of interest.

Finally, if no one will give him a car loan, he can get a co-signer. Margie could agree to be responsible if he defaults on the loan. But that’s a step that should only be taken after careful thought. Remember, the banks are saying that he’s not a good credit risk. When you co-sign a loan, in effect you’re saying that you know more than the bank. And you’re willing to put your own money behind your beliefs. If anything happens she’d be responsible to make the payments.

Now that we’ve seen how Margie’s son can establish credit, let’s ask a different question. Is a car loan really the best way to go? Is it wise to borrow to buy a car?

And, he’s created a pattern that could last a lifetime. If he’s making car payments it will be hard to save up for his second car. So he’ll be borrowing again. And again with the third. It’s as if he’s agreed to pay 20% more for every car he buys as long as he lives.

Sure, he probably can’t afford to pay cash for the car he wants now. But by sacrificing with a cheaper, affordable car now, he could save himself tens of thousands of dollars over the years.